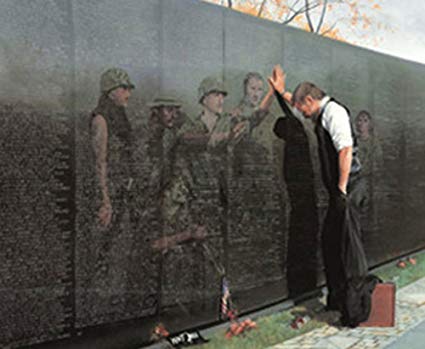 I stand at the start of a wall
it stretches out before me,
it turns and curves,
bends and swerves,
like an undecided snake, trying to find its way.

I walk over the brick
worn down by the soles of others who have trod before.

Names on a wall.

All I can see are names.

And turn to face the granite,
my hand outstretched,
until I touch the cool, smooth stone,
I feel the grooves and sharp angles,
where the granite
was chipped away
to make a name.

Slowly, I trace each letter with my forefinger
when I am done,
I begin to walk away.

I am stopped,
by the sight
of my own face
reflected like a mirror in the stone,

I am among the fallen.

I begin to think
not of the names
but of this one name
and Mr. and Mrs. Someone
who gave this name away
all those years ago.

My heart is pounding in my ears as I sit in the parking lot, phone pressed to my ear. “What do you mean, he’s dead? He was supposed to come over for dinner this weekend.” My voice sounds hollow and alien to me as it comes out of my mouth. I hang up the phone and just sit quietly for a minute to gather my thoughts. I feel the tears being pulled up from my throat and force the lump back down. I am not ready to release this emotion yet. I fumble my car key into the ignition and turn it on. My mind is hazy and distracted, somewhere in there is a thought that maybe I shouldn’t drive until I have a clearer head. But I don’t listen.

The old 3 family house in what used to be the nice area of town. Green and white wooden shutters that haven’t been painted or replaced since Nixon was in office, are now faded and the paint has been eroded away. The front porch is rotting and sagging with debris piled on it as if someone was squatting there at night. “Honestly”, I think to myself, “they probably are”.

I look under the mat and find a key. It opens the front door. I have never seen the inside of this house. My grandfather was a private man, always preferring to go to someone else’s house rather than have people over his.

Quietly, I look around at the knickknacks and treasures he held so dear. His daughter’s dress from when she was 5 years old, his son’s stereo equipment and desk from 40 years ago. His wife’s kitchen gadgets, which are now antiques.

I feel a force pulling me up the stairs, I heed the call and begin my trek up the creaky stairs, careful not to step on any rotting wood. I go all the way up to the attic. In the corner there is a pile of stuff, boxes upon, boxes upon, boxes of stuff.

Underneath all those boxes, I see a wooden crate. It looks old and weathered. Quickly I move everything else out of the way so I can get to the wooden box. It is not locked. I heave open the heavy lid. What I find makes me gasp audibly. There are pictures of a man I recognize as my grandfather as a young man. He is wearing a uniform that I didn’t know he wore. USMC. I begin to look through the rest of the trunk and find his rifle; a 1903 Springfield, as well as two sets of uniforms both neatly folded with military precision. Underneath the uniforms; there is a medium sized black case. It looks like a jewelry case but bigger. I think I know what’s in the case. With shaking hands I reach out and gingerly pick it up. I open the case and find 6 medals. I look closer, I see the Medal of Honor, a Purple Heart, Navy Cross, The Navy distinguished Service Medal, The Distinguished Service Cross, and the Silver Star.

I had no idea about this side of my grandfather. It was a complete surprise to me. I went through some of the paperwork in the trunk and found that he was a sniper in the Pacific Theater. He once held off an entire Japanese unit by himself so his buddies could take cover. That’s what the Medal of Honor was awarded for. The Navy Cross was for carrying a young private that had been badly injured through an open field while a firestorm of bullets whizzed around them to safety. The Purple Heart was awarded to him when he was shot in the abdomen. And on and on. Pages and Pages of accounts of valor and bravery. And I never knew any of this while he was alive.

Suddenly I knew why I was sent to his house. He wanted me to find this secret. I knew he had to be honored for his deeds.

I slipped the case carefully into my bag along with his uniform and service pictures. Feeling full of purpose, I headed home to share my newfound information with my family.